His policy is to look the other way while innocent people were murdered and starved. I view Barack Obama as a traitor to American values,” said Paladino.

I don’t know. Congress has the right to declare war, and ask Obama to lead it. Did they even ask?

In other words, I am not sure Congress can actually start a war, but they could at least find the funds to fight it, then ask Obama to lead the fight into Syria.

I suppose Carl will be going after them next.

Source: Trump ally Carl Paladino: I was ‘emotional’ when I wished Obama dead and insulted the first lady

Extraterritoriality. The recent repression is worse because China’s officials are attempting to extend it beyond China’s borders.

Exactly. The Oversea-Chinese did not extend China’s borders, they worked beyond them, and, in such a position, they were considered the Child of the Parent.

Now positions are changing. More exactly the posture is changing.

The Parent can now be observed to be moving and posturing the boarders (much like the Europeans moved the boarders into North America and postured much of the world in their image), especially the South China Sea and Pacific (Actually Austrailia, forget Taiwan and the Phillipines, they are lost).

The world (and specifically the Trump administration) are going to be dealing with the Parent of the Children now in the South Pacific.

War will be determined by the interest, honor, and fear this new relationship has on the environment that the Chinese now occupies, and especially now that the Parent instead of Child is the one who is the focus of that distribution.

War between China and the US is probably enevitable, because the Trump administration, at least those producing policies instead of tweets, are blind to change, because of their culture.

Source: China’s Threat to the U.S. – The Atlantic

Let’s stop pretending what he ( Pence) is talking about. Cheney was the “grownup” in the relationship and Bush was the “spoiled kid”.

We can see from where Mike Pence is coming from. He will have to run the country and become the commander-in-chief, because, like Bush, Trump isn’t up to it. He is not completely ignorant, but stupid.

Bush, in a stupor, had to have his Chief of Staff run the war in Iraq, because he, Bush, thought it was about another Crusades.

My guess is that Pence will continue the war against Islam, while ignoring Nixon’s connection to Globalization, while Trump moves America towards authoritarianism. #fail

In my old vernacular, the “Gap-shrinking” continues, it is just more obviously and geographically divvied up, with Asian great powers (China, India, Japan) nonetheless forced into some competitive thrusts into the Center (particularly Africa) for reasons both immediate (resource access) and long term (tomorrow’s biggest cheap-labor – and consumer – pool).

I think the idea of  “Gap-shrinking” has long been proven dead. The mechanism of a “Gap” only works if the structure is the same for each position on either side of the gap, and, in most cases, it never is.

Ok, the structure of the UK, Japan, Saudi Arabia, US and many other nations in Europe, MENA,  South America, with a strong sense of a center of gravity are nearly the same. Other nations who rely more on a center of mass, such as Russia, Turkey, Iran and others, the structure of their networks are quite different. For these two different network structures, when crossing the “gap” the key doesn’t fit the lock.

So what does Putin seek? He seeks to take advantage of any position in his favor between the two networks, i.e. the distributive network of the East and the decentralized network of the west.

If he doesn’t (take advantage), the center of mass in Russia will change, and, most likely than not, Putin will be crushed in the process.

Mother Russia is hard on fathers as well as daughters.

“Unstable Hillary Clinton,” Trump said. “You saw where she basically short-circuited? She short-circuited. She used the term. I think that the people of this country don’t want somebody that’s going to short-circuit up there.”

And saying 7/11 when you meant 9/11 isn’t short circuiting? Does Trump really want to get into a war with Hillary, on the assumption that one candidate seems to be unstable? I am afraid Trump is beginning to see much of himself in Hillary, and there is no one around him who could tell him to stop it.

But it could be that he has hired some apprentices, and they might have ties to the other side. If any “rigging” going on it will be inside the Trump structure, so I assume this must keep Trump up nights, thinking this shit up, while at the same time keeping control of his own campaign.

Steelworkers do the best rigging! Maybe he should have them build the wall for him?

On the other hand, considering the party that he has around him, he should stick to writing his own stuff. After all, when one observes the image of wheels turning around inside one’s head like some cartoon, I don’t think that image looks anything like Hillary. Listen to Republican presidential candidate Donald Trump discuss some of his foreign policy positions with The Washington Post editorial board. “NATO is costing us a fortune,” Trump said. “We’re not reimbursed fairly for what we do.” (The Washington Post)

Perhaps, in regards to what we “do”,  NATO doesn’t reward bad behavior?

Is Trump suggesting the US tells the computer industry where to manufacture and assemble their products, as he re-arms Europe and sends defence contracts overseas?

Source: One of Trump’s foreign policy advisers is a 2009 college grad who lists Model UN as a credential – The Washington Post 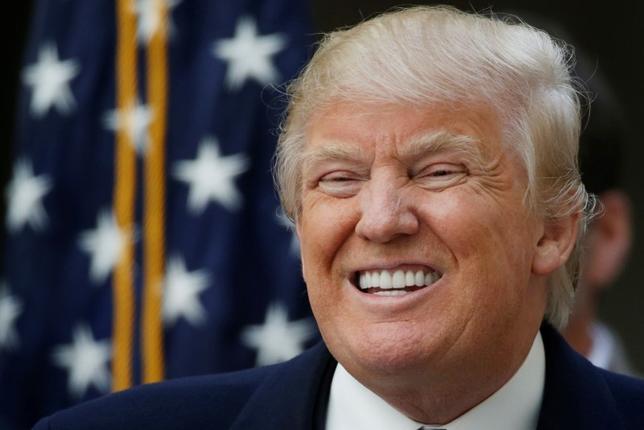 The Kremlin can’t believe its luck,” said Konstantin von Eggert, an independent Moscow-based political analyst who believes the Obama administration has not been forceful in countering Russia.

President Obama and (Secretary of State) John Kerry were a dream team for them, but now they have an even better option; someone who thinks that America should have nothing to do with the rest of the world.

A lot can be said about Putin, but it can not be said that he is not a leader–Trump, so far in his bid for the POTUS, has not shown that he is a leader.

The Kremlin, under the Putin leadership, knows how to deal with businessmen, their business model depends on it. Putin has said the he will build an Industrial Military Complex and to accomplish that he needs customers.

Dealing with leaders, such as Obama, Hillary, or Bernie Sanders is another thing. Leaders are behind (or infront) of a movement and are hard to control–businessmen are not. Businessmen are not necessarily leaders, but to be successful, they must know their customers and they must know how to deal in cash. For leaders to be successful they need to be ahead or behind a movement of people.

“It must be money you brought, to better haggle with us on key issues,” Putin joked, looking across the table at a smiling Kerry.

When Trump’s Secretary of State visits Putin, the briefcase will be full of money, as Putin expected. Businessmen know that there is a price for every customer, and Trump, I am sure, will be more than happy to buy into what Putin is selling, i.e. leadership, as long as Trump gets to put his name on it.

Source: From Russia with love: why the Kremlin backs Trump – To Inform is to Influence

The use of special operations forces (SOF) in war fighting and peace keeping efforts has increased dramatically in recent decades. A scientific understanding of the reason for this increase would provide guidance as to the contexts in which SOF can be used to their best effect.

I wonder if scientist understand the difference between Special Forces and Special Operating Forces. (Hint: it is in their charter, i.e. two operating platforms under two different rule-sets.).

Special Operations Forces (SOF) provide war fighting capabilities that complement conventional forces. A conceptual framework is needed to clarify and differentiate the role of SOF within the larger military system to aid decision-makers in identifying when it is necessary and appropriate to utilize SOF and when conventional forces are better suited.